We now have 13 official movie still’s from Divergent. In my haste to get them up as soon as possible the other day, I did not take the time to sit and fully LOOK at each image! So I thought I would go over each one and point out the basic things that I see that I found exciting and interesting!

1. This is Neil Burger (director) talking to Theo James (Four) and Jai Courtney (Eric).  Obviously the first thing I see in this picture is Four. Duh. But VERY quickly my attention is diverted to Eric. Oh My Gosh. He looks JUST how I pictured him and loathed to hate him in the book! It’s perfect! I’m pretty sure they are in the training room. I think you can see the bulls eye’s from the first still released with Tris along the back wall. I can make out who the other people in the back ground are.

Click to continue reading and analyzing these pictures with me!

2. Tris (Shailene Woodley) Training while Four (Theo James) watches on. Okay first thing I see are Tattoo’s… Tris’ ravens on her chest. And Theo really does have that “Stare/look” down of Four doesn’t he!?

3. Tris, Chistina (Zoe Kravitz) and Will (Ben Loyd Hughes) are on an El Train. They are the initiates that are Allies with Tris. Christina looks a bit beat up from training.

4. Tris training to shoot with Four looking on (again with the stare) SO INTENSE! We get some close up look’s of the guns… And the wardrobe which is interesting. I like the purple in Four’s Jacket.

5. Andrew Prior (Tony Goldwyn) is Tris’ father. He is in Abnegation clothes but I really don’t know what scene this could be from. Seems serious ?

6. Aptitude Test!! Tori (Maggie Q) is giving Beatrice Prior (Tris) her aptitude test which determines which of the factions she is best suited for. Except the test goes awry and Tris discovers she is Divergent. Suited for more than one faction. Tori is not really how I pictured her. I thought the book said she was greying but I could be wrong. Also her hair is up which would make it hard for Tris to see the bird tattoo on her neck. I like the added color into her hair though, I also don’t see mirror’s on the wall’s like the book describes.

7. There has been some controversy over WHAT exactly this picture is! Some think that it is the Dauntless carrying her in the Cafeteria, Some seem to think it’s the end of the zipline scene when everyone has to catch her. That thought seems interesting to me. I like that idea!

8. Tris and Four in the Training room again. I want to make up a rather important conversation in my head for this one. Maybe this is when he figures out that she is Divergent? And confronts her?? Could be? Maybe? All I know is that when they look at each other it makes my heart race a bit from the intensity.

9. The Ferris Wheel- Capture the Flag. I squeeled like a little girl when I saw this. Just AHHH! I feel as though the surrounding scenery is too lit up… I pictured it A LOT darker but I get we need to be able to SEE them! Tris and Four are carrying their paintball guns around looking for the flag. I LOVE how dystopian everything looks! 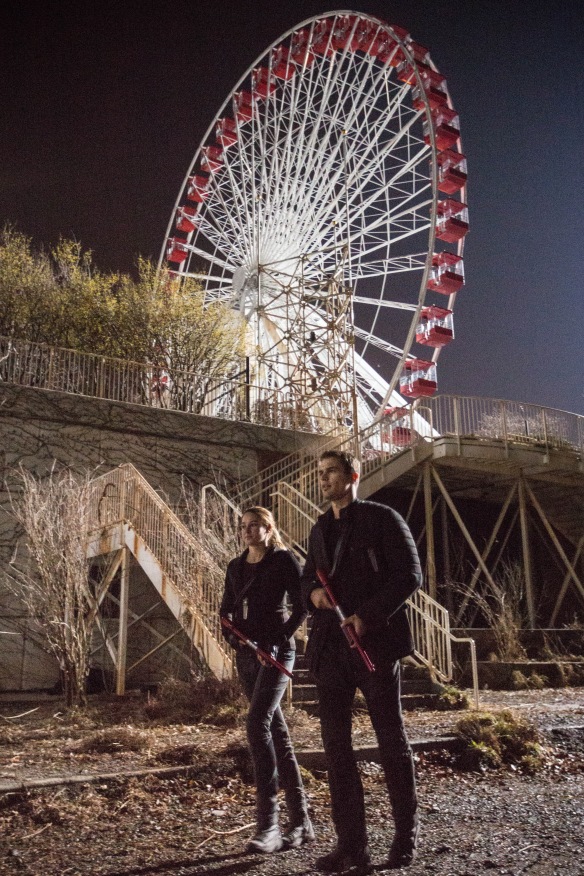 10. It took me a couple time’s of looking at this picture to realize this is the precise moment when Al’s mask is pulled off and she realizes that HE was IN on her kidnapping. The look on her face is priceless. I LOVE it! 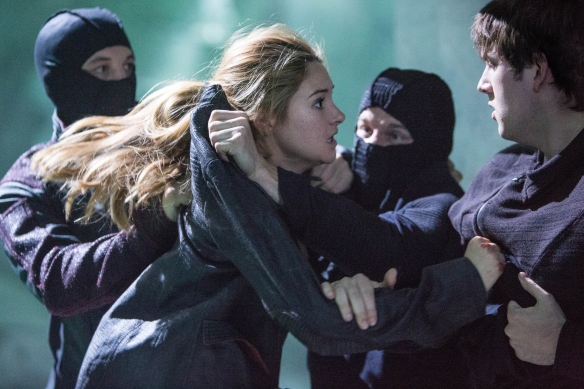 11. First Jumper!! SO many feels. While reading the book I think “Oh that’s no big deal” but seeing this stuff come to life… HECK NO would I jump off that building into an unknown hole! It makes me even more proud of Tris looking at this! I love her Abnegation clothes with all the Dauntless behind her esp Eric and the Chicago skyline! 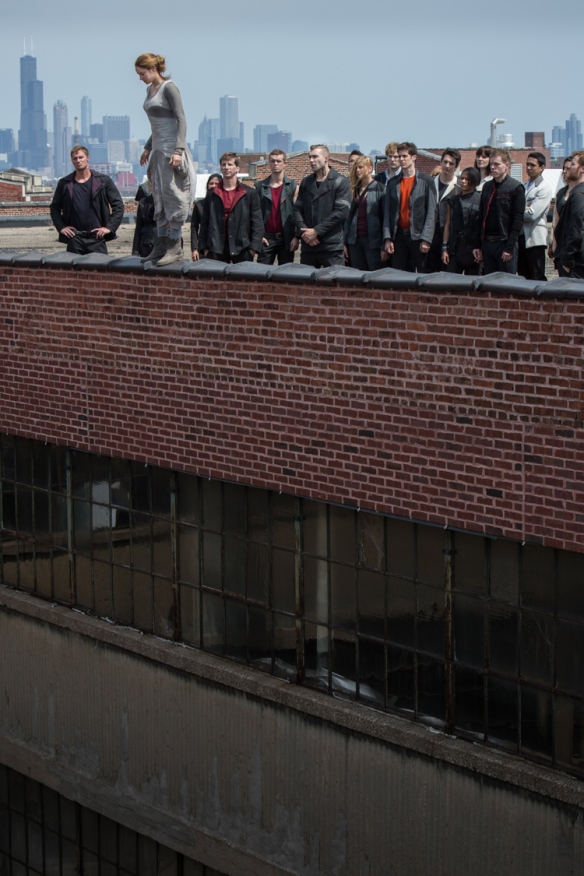 12. This was obviously the FIRST still released of Tris against the Target’s in the training room during the knife throwing scene. I LOVE the look of the training room. SO perfect. The look she has captured on her face is exactly what I felt Tris would look like while reading the book! And just KNOWING that she is staring RIGHT back at Four… AHHH! I want to see her view SO bad! I was honestly hoping for a little blood on her ear for this picture. “You did that on purpose” CANNOT WAIT! 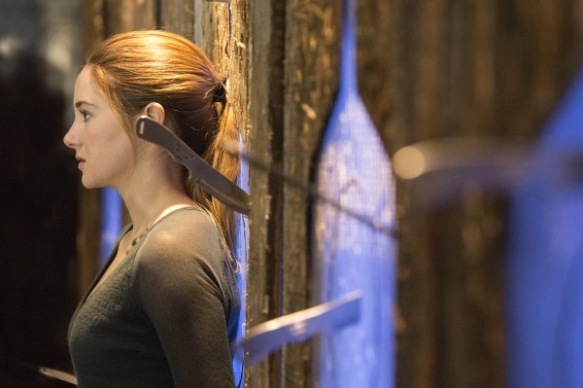 13. And FINALLY…. FOUR. So many feels. So many that I already wrote a whole blog post specifically for this picture and why I feel that Theo James embodies Four. You can refresh your memory by reading it HERE. But in case you are lazy here are some key things: Biceps. Brooding. Lips. Clenched Hands. Piercing Eyes. The man just has this down. Now I just need to hear him speak in an American accent. At this point I think they should have made Four British!

What other thoughts have you guys had! Did I miss anything?? What can’t you wait to see! Sound off to us on twitter or in the comments!