John Kelly the executive producer for Divergent tweeted this picture of Theo and Shailene’s set chairs today with the caption “Almost over on this one!!!” 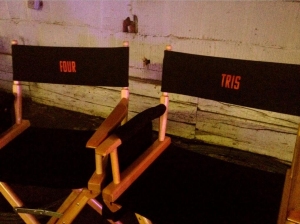 This has been an absolutely awesome ride watching this movie being filmed. While it is sad to see set’s being torn down and filming coming to a close, it just means we are one day closer to Premiere’s and Opening Nights!