MTV shared what they thought the best five scenes from the Divergent Teaser Trailer were…..

Being Different
When Abnegation-born Beatrice undergoes her aptitude testing (a requirement for all 16-year-olds), she’s delivered unsettling results by administrator Tori (Maggie Q): “You’re different. You don’t fit into a category. They can’t control you. They call it Divergent. You can’t let them find out about you.”

“And what if they already know?” Beatrice asks.

Those words haunt Beatrice, and instead of staying with her friends and family in the faction she knows, she decides to pledge the Dauntless.

Taking A Flying Leap
Of course, being an initiate in the most fearless of factions is no mean feat. One of Beatrice’s first tasks is to jump from the roof of a seven-story building into Dauntless headquarters — through an ominous black hole. Here we see her, still clad in her Abnegation gray, make the perilous leap, proving her mettle to both the Dauntless leaders and her fellow initiates.

Going To The Mat
Initiation begins with physical training. Tris (renamed and in her Dauntless black) takes her punches from rival Peter, and later we see her face down hurtling knives, with one whizzing perilously close to her face, nicking her ear and drawing blood. What you don’t see here is that it’s her mentor/love interest Four who’s doing the throwing. (Those Dauntless have a funny way of showing their affection…)

Getting A Better Vantage Point
In what will probably become one of the most iconic scenes from the film, Tris and Four climb the dilapidated Navy Pier Ferris wheel during a game of Capture the Flag to get a superior view of their competition. It’s a pivotal moment, not only because Four overcomes his own fear (heights!), but because the two share a palpable moment of sexual tension that will soon pay off.

James, who stopped by MTV’s VMA All Access Experience ahead of Sunday’s ceremony, described the smooch thusly to Josh Horowitz: “I just went at it hard, to be honest, because I thought that’s how she wanted it. I thought to assuage any awkwardness I would just go for it. She was kind of batting away my hands. It was kind of nice because we had Miles as Peter literally in the background as we were kissing. He was making hissing noises which actually added to the sexuality.”

What do you think? What was your favourite scene from the teaser trailer?

I loved the “hard kiss” and Tris’ hand “grazing Tobias’ back tattoos” but I also LOVED the knife throwing scene:

Tell us your favourite scene in the comments below…..

Summit put up the Divergent trailer, which I may or may not have watched more times than I want to admit today….. go ahead, watch again!

Also check out our screen caps from the trailer below…. every frame, frozen in time, for you to enjoy! The kiss, the hand holding, the knife, the bleeding ear, Tobias’ back tattoos……

Keep checking back for more pictures! Here is the First: FOURS BACK! To See the Original Screencaps from the First 10 second look click HERE!

We got a 10 second teaser today for the Divergent First Look that will be shown Sunday 8/25 at the MTV Video Music Awards! It sounds from the teaser like this will be show during the pre-show right before the show! Make sure you check your local listings and set your DVR! Until then, We have 20 screen caps from the 10 second teaser, Amazing how much you can actually see in less that 10 seconds! Jeanine, Max, Tori, Dauntless Invasion, FOUR, FOUR and did we mention FOUR!? Pretty sure that is his Fear Landscape we are seeing?? Capture the Flag, and Train Jumping! Check them out!

Christina and Tris jumping off the train

I think I am still in a post SDCC hang over! To say that last week covering ‘Divergent’ at Comic Con is most def an understatement! You have seen most of our coverage from the event’s but I wanted to jot down just a few of my personal experiences!

Thursday July 18th started out our day of Divergent SDCC coverage! I got up early to go get my badge and got in my first line of the week- Starbucks!

After I got my caffeine intake, our blogger Mandy and I were off to the Hard Rock Hotel to do our 1:1’s with some of the Divergent cast! If you missed the interview, You can check it out HERE

We loved getting to meet some of the cast! As we were heading back to the Elevator, Shailene and Theo walked past us on their way to a different interview and that was my first glimpse of Theo. Wow.

After the 1:1, we headed back over to our hotel to upload video and post pictures before the press conference. It took 6 hours to load that one clip to youtube. Good Grief. We wanted a good spot for the press conference so we showed up a bit early and relaxed. We ended up getting front row and were able to get some awesome pictures from the press conference! To see the HQ pictures click HERE and HERE! Some of my highlights from the press conference were hearing what Shailene and Theo’s favorite scene’s to films were (Ferris Wheel for Shai & Four choking Tris and snapping out of the simulation for Theo) Theo’s fear being “hummus” and it sounding A LOT like he said something ELSE, and really just sitting there taking it all in!

After the Press Conference, We jolted out and took a beeline for Hall H to try and catch the Divergent Panel and see the footage but the line was too long and we didn’t make it in. I retired to my hotel room to rest and update the site before the Summit Celebration that night!

Around 8:15 after changing shoes 4 times I headed out to ‘207’ at the Hard Rock Hotel where the Summit Celebration was to be held. The Hard Rock is right in the middle of San Diego’s iconic ‘Gaslamp’ District and it was alive with people. At the party, I got a chance to chat and meet pretty much everyone from the Cast as well as Veronica Roth.  My night was made when Theo James busted out into a round to show off some awesome dance moves. Click HERE for that video! The conclusion I came to after being at that Party, was that we have an awesome down to earth cast. Not once did I see a cast member go hide in a VIP area. Shailene esp was having Fun and Dancing and just letting loose. I hope they keep this as the film’s progress! Here are some pictures for you to enjoy of the night: 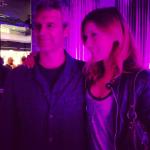 The rest of the weekend I was BUSY, Busy, Busy doing press for SandwichJohnFilms.com in which I got to meet some more awesome people and then Sunday I spent most of the day hunting down ‘Divergent’ swag for us to give away in the coming weeks! Here is a sample of some of the stuff you have to look forward to!

The week was fantastic! Thanks for watching our Comic Con coverage and we have lots more exciting things happening in the coming weeks!  -April

(PLEASE LINK BACK IF YOU USE ANY PICTURES! THANKS!)

This is a fan-site by the fans and for the fans. Our goal is to share the newest/latest Divergent book/movie updates. It is not affiliated with the books, upcoming movie, Veronica Roth, etc., in any way. No money or gifts have been (or will) be taken in order to run this site. It is purely for fan dedication. And dedicated fans we are!